Mary wished to say something sensible but knew not how.

Jane Austen visited London frequently, often staying with her brother Henry, enjoying life in London and the opportunity to confer with her publishers. 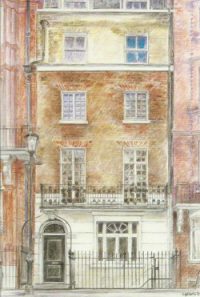 No 30 Hans Place, the remaining house of the terrace where Henry Austen lived.

The London Branch of the Jane Austen Society meets on several Saturdays at St Columba’s Church Hall, Pont Street, SW1. (See exceptions below). These meetings, of which one is free to members of the Group, feature either speakers or speaker-led discussions, sometimes with visual presentations. Tea and biscuits are included. Afternoon meetings start at 2.30pm, and full-day, three-speaker, meetings start at 10.30am with coffee. Members pay £7 for each of the talks/discussions they attend, non-members pay £10. In addition, there are Branch Outings in the summer and a Birthday Lunch on a Saturday early in December. 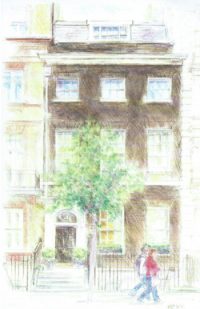 No 123 Sloane Street, Chelsea, the last remaining house in Hans Town, similar to No 64 where Henry Austen lived.

The Branch has a stall at the main Jane Austen Society’s AGM held each July at Chawton. On behalf of the Jane Austen Society the Branch also looks after the grave of Eliza de Feuillide, Jane Austen’s cousin, wife to her brother Henry and supposedly model for Mary Crawford in Mansfield Park. The grave is in the churchyard of Hampstead Parish Church. To find it, turn immediately left inside the gates on a little path along the wall, to a large horse-chestnut tree. The slab is on the right.

Membership of the London Branch is around 130 and is not confined to residents of London districts. New members are always welcome. The annual subscription is £10 and runs from 1 April. This includes two Newsletters a year in spring and autumn. If you would like to join the London Branch, please complete and return the application form via the link below.

While priority at all events is given to members and their guests, non-members, including those from the national Jane Austen Society, are warmly welcomed and charged as guests.

The events listed below are those specifically arranged by the London Branch of the Society. For details of other events related to Jane Austen (theatre productions, musical events, lectures, literary festivals etc), some of which may also be located in this area of the country, please refer to the Events Listing page.

For further details on any of the events listed below, please contact:

The Jane Austen Society London Branch can take no responsibility whatsoever for any personal loss or injury incurred on or during any of their events.