Jane Austen had links with Scotland, even though she did not visit the country. She was a great admirer of Mary Queen of Scots. 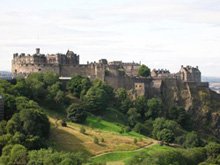 Her brother Henry, on a trip to Scotland, revealed Jane’s identity as the authoress of Pride and Prejudice to Lady Robert Kerr. Jane wrote in a letter to her brother Francis, ‘Henry heard P & P warmly praised in Scotland, by Lady Robt Kerr & another Lady; – what does he do in the warmth of his Brotherly vanity & Love, but immediately tell them who wrote it!”

Her publisher for Emma, Mansfield Park, Persuasion and Northanger Abbey was John Murray of the Scottish publishing family, and one of her admirers in the literary world was Sir Walter Scott. His praise for Emma is recorded in the Quarterly Review where he states her characters were ‘finished up to nature; and with a precision which delights the reader’. In Pride and Prejudice, Scotland is synonymous with Lydia’s elopement with Wickham!

The Scottish Branch of the Jane Austen Society was established in 2004 and since then it has continued to grow, with over 80 members. Our Patron is Margaret Dean, former Lord Lieutenant of Fife. The Branch has a minimum of four events during the year, which include eminent speakers in the field of Jane Austen, a Summer Outing, and a Jane Austen Birthday Lunch. We also produce a regular Newsletter. The Branch has had a number of very successful One-Day Seminars, and our members have been represented at Jane Austen events both in the UK and America.

Our membership has a wide range of interest in Jane Austen, from the erudite to those who simply know Jane through television and film dramatisations. All our members are fully involved in the life of the Branch and it is this enthusiasm that has enabled the Scottish Branch to continue to expand and develop.

We look forward to welcoming new members to the Branch.