Jane Austen was born at the Rectory in Steventon, a village in north-east Hampshire, on 16th December 1775.

She was the seventh child and second daughter of the rector, the Revd George Austen, and his wife Cassandra (née Leigh). Of her brothers, two were clergymen, one inherited rich estates in Kent and Hampshire from a distant cousin and the two youngest became Admirals in the Royal Navy; her only sister, like Jane herself, never married.

Steventon Rectory was Jane Austen’s home for the first 25 years of her life. From here she travelled to Kent to stay with her brother Edward in his mansion at Godmersham Park near Canterbury, and she also had some shorter holidays in Bath, where her aunt and uncle lived. During the 1790s she wrote the first drafts of Sense and Sensibility, Pride and Prejudice, and Northanger Abbey; her trips to Kent and Bath gave her the local colour for the settings of these last two books.

In 1801 the Revd George Austen retired, and he and his wife, with their two daughters Jane and Cassandra, left Steventon and settled in Bath.

The Austens rented No. 4 Sydney Place from 1801-1804, and then stayed for a few months at No. 3 Green Park Buildings East, where Mr. Austen died in 1805. While the Austens were based in Bath, they went on holidays to seaside resorts in the West Country, including Lyme Regis in Dorset – this gave Jane the background for Persuasion. 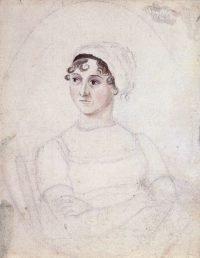 In 1806 Mrs. Austen and her daughters moved to Southampton, and then in 1809 to Chawton, where they had a cottage on one of Edward’s Hampshire estates. Here Jane was at leisure to devote herself to writing, and between 1810-1817 she revised her three early novels and also composed another three – Mansfield Park, Emma, and Persuasion.

Jane fell ill in 1816 – possibly with Addison’s Disease – and in the summer of 1817 her family took her to Winchester for medical treatment. However, the doctor could do nothing for her, and she died peacefully on 18th July 1817 at their lodgings in No. 8 College Street. She was buried a few days later in the north aisle of Winchester Cathedral.

Jane’s novels reflect the world of the English country gentry of the period, as she herself had experienced it. Due to the timeless appeal of her amusing plots, and the wit and irony of her style, her works have never been out of print since they were first published, and are frequently adapted for stage, screen and television. Jane Austen is now one of the best-known and best-loved authors in the English-speaking world.