Emma Woodhouse regards herself as the most important lady in the village of Highbury, being mistress of her father’s house and receiving the deference of all the neighbourhood. She is cleverer than most of her acquaintance, and loves to meddle and arrange their lives for them. The only person who ever expresses any criticism of Emma is Mr Knightley, who owns the nearby Donwell Abbey and estate. Sixteen years older than Emma, he is both fond of and exasperated by her. His younger brother is married to her older sister, and they have a string of nephews and nieces in common.

When the story opens Emma’s erstwhile governess, with whom she has enjoyed a warm friendship, has just married and Emma looks around for a different sort of companion and friend. She decides to take up Harriet Smith, a pretty but vacuous girl who boards with the village school- mistress, having no visible family of her own. Detaching Harriet from the tenant farmer who has fallen for her, Emma looks around for a good match for her new friend and fixes on the young vicar, Mr Elton, manoeuvring them frequently into promising encounters. Emma is devastated when Mr Elton actually proposes to her, having been under the impression she was encouraging him on her own behalf. 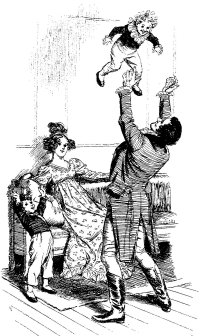 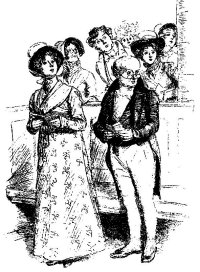 Emma has always declared that she has no need to marry herself, having a comfortable home, income and status already, but she has a secret fancy for the stepson of her governess, who now makes his first appearance at Highbury and turns out to be as charming as Emma hoped. Two more characters come to live in the village, Jane Fairfax, an elegant but penniless girl of Emma’s own age, who comes to spend some time with her grandmother and aunt Mrs and Miss Bates, before going to be a governess; and Mrs Elton, the vicar’s bride whom he has met and courted in Bath on the rebound from Emma’s refusal. Mrs Elton comes into Highbury society with inflated ideas of her own importance, forms a mutual antagonism with Emma, and attempts to patronise Jane Fairfax, who keeps her feelings hidden under a cloak of politeness.

Emma’s feelings for Frank Churchill subside into mere friendship, but she fails to pick up the clues that he is in fact secretly engaged to Jane and seeing her at every opportunity. Emma encourages Harriet to think of Frank, but Harriet has transferred her affections to Mr Knightley. At a hot and fractious picnic on Box Hill, Emma is rude to Miss Bates and is rebuked for it by Mr Knightley, and Frank’s attention to Emma pushes Jane to the limit of her endurance and she engages to go as a governess. The couple are eventually reconciled, their secret comes out, and almost simultaneously Emma realises that she loves Mr Knightley. He, fearful that Emma has been hurt by Frank, tries to offer her comfort, and reveals his own wish to marry her. Despite this exquisite fulfilment of her hopes, Emma still suffers on Harriet’s behalf, but all is happily resolved when the tenant farmer Robert Martin renews his suit and Harriet readily accepts. Three new couples have been made, with Emma and Mr Knightley promising to be wise leaders of their society, Emma having learnt some humiliating lessons but still retaining her most loveable characteristics: Mr Knightley finds her ‘faultless despite her faults’ and the reader is inclined to agree.

Concern about the weather

‘A heroine whom no-one but myself will much like’, Jane Austen called her eponymous heroine when she was writing Emma. But readers do like Emma, very much, despite her faults of snobbery and vanity. She is an affectionate and patient daughter, a delightful aunt, and a loving friend to Mrs Weston. But it is the play of her mind that perhaps entrances us most.

Emma is often playful. It is one of the qualities which Mr Knightley loves her for, and which seems to promise them a happy partnership. But she can also be rational. We are told early in the novel that though she dearly loves her father, he is no companion to her. ‘He could not meet her in conversation, either rational or playful’. Mr Knightley can. They are both natural leaders of their society, and function well together, long before they have recognised their mutual love. Consider this exchange, early in the novel, when a sudden fall of snow has produced panic in all the rest of the company:

While the others were variously urging and recommending, Mr Knightley and Emma settled it in a few brief sentences, thus:

“Your father will not be easy; why do not you go?”
“I am ready, if the others are.”
“Shall I ring the bell?”
“Yes, do.”
And the bell was rung, and the carriages spoken for.

Emma dominates her novel to an extent not equalled by any other Jane Austen heroine, and it is rightly named after her. While most of the novels begin by explaining the family circumstances before coming in to focus on the heroine, the first words of this novel are: ‘Emma Woodhouse’, and the first sentence is a description of her personality: ‘handsome, clever and rich, with a comfortable home and a happy disposition’.

All Jane Austen’s narratives are seen through a young woman’s eyes, but Emma Woodhouse does not just experience, she shapes events. Rich and powerful within her home and her community – a rare state for an unmarried woman – she enjoys exceptional freedom of action. Other heroines are called on to react to what happens about them; Emma is, by contrast, proactive. Because there are relatively few external constraints on her behaviour, she has all the more scope to make mistakes: some comic, some seriously affecting other people’s lives, some seeming to jeopardise her own happiness. The catalogue of Emma’s mistakes gives most of the impetus and interest to the story.

The novelist P D James has called Emma a great detective story, and it has claims to be the first of that genre. Not, of course, the kind of detective story that revolves around murders, police detectives and amateur sleuths. But the novel certainly has at its heart a secret, which is hidden until nearly the end from both the central consciousness – Emma – and the reader.

Almost no first-time reader of the novel even guesses that there is a secret, much less what it is. But the pleasure is by no means diminished on a second or subsequent reading; if anything it is enhanced. Now the enjoyment lies in picking up the clues and being amused by Emma’s obliviousness to what is going on under her nose. The clues are all there, so well hidden by Jane Austen that they make no impression before the secret is known, and yet so precise that we cannot accuse her of leading us astray.

Our first reading brings home to us directly the very lesson Emma herself has to learn, namely how difficult it is to interpret other people’s behaviour. Subsequent readings of the novel have an added intellectual dimension in appreciation of Jane Austen’s artistry.

A sense of community

Emma is unusual among the novels in focusing on the heroine as a member of a community. Other heroines will achieve this position with marriage, beyond the span of the book; Emma has it already, and her marriage will only confirm and perhaps enlarge her sphere of influence. So while the other novels follow their heroines away from home on a variety of learning experiences, Emma is static. The action takes place wholly in Highbury, the ‘large and populous village, almost amounting to a town’ where Emma has lived all her life.

In another departure from Jane Austen’s practice, Emma embraces different levels of society. Speaking parts are confined, as usual, to members of the gentry, but other classes have a physical presence; individuals are names and differentiated, their various doings acknowledged. The impression is gradually built up of a thriving, busy community. We hear of shopkeepers, schoolteachers, lawyers, a physician, an innkeeper, an ostler, a bailiff, a tenant farmer and servants from the various households, as well as the family of a sick cottager visited by Emma.

All these people, to a greater or lesser extent, are subject to the patronage and goodwill of Emma Woodhouse. She has been placed by her creator in a more comfortable and privileged position than any other of the heroines, and the lesson she must learn in the course of the novel is how to fulfil the duties it entails. In one sense the community exists to test Emma; this is a novel about village life because Emma’s particular character demands this particular trial. In another sense, of course, the community has a life and reality of its own, and Emma over-estimates her importance to it. This is another lesson that this heroine, ‘faultless in spite of all her faults’ as Mr Knightley thinks of her, has to learn.