The person, be it gentleman or lady, who has not pleasure in a good novel, must be intolerably stupid.

At ten years old, Fanny Price is brought to live with her rich relations at Mansfield Park. Timid and modest by nature, she is overawed by her smart cousins Maria and Julia Bertram, their pleasure-loving elder brother Tom, their father the formidable Sir Thomas Bertram, and their aunt the bossy and spiteful Mrs Norris. Only indolent Lady Bertram and kind cousin Edmund do not strike fear into little Fanny’s heart. 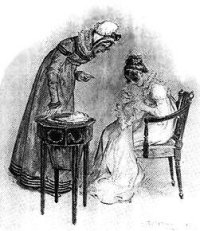 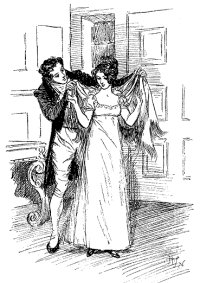 Just as Fanny reaches eighteen, a new family comes into the neighbourhood fresh from London society: brother and sister Henry and Mary Crawford. Henry, who is a practised flirt, sports with the affections of both the Bertram girls, causing jealousy between them. Maria is already engaged to the rich but stupid Mr Rushworth, but this does not deter either her or Henry. Fanny looks on with disapprobation and sympathy for Mr Rushworth’s feelings. Meanwhile Mary Crawford, who has a most attractive personality but shaky principles, finds to her surprise that she is not interested in the elder son, Tom, the one with all the prospects, but is strangely drawn to the serious Edmund, who is destined for the church. This causes much anguish to Fanny, who loves Edmund herself, and who has to observe him falling for her rival’s charms.

All this has been happening in the absence of Sir Thomas, but on his return Maria hopes Henry Crawford will ask for her hand in marriage. When he fails to do so, taking himself off to Bath, she coldly goes ahead with her marriage to Mr Rushworth, determined to get her house in town and freedom from her father’s restraints. She departs on honeymoon, taking Julia with her.

Fanny is now the only young lady at home, and when Henry returns to Mansfield, he notices her for the first time and tries to make her in love with him, but she loathes him for the way he treated her cousins. However, her resistance is so appealing to him that he ends up actually falling in love with her and asking her uncle for leave to address her. Sir Thomas cannot understand Fanny’s determination to refuse him, and packs her off to her parents’ humble home in Portsmouth, hoping she will come to realise the value of Henry Crawford’s offer. She continues to hold out, even when Henry visits her in Portsmouth, and even though she is disappointed in her parents and deeply uncomfortable in their badly managed home. News gradually emerges from London that Henry and Maria have gone off together. Henry, having met up with Maria and, being rejected by her, had resumed his attack. This led to an adulterous affair which failed to satisfy either party. Mary, by treating the matter of adultery lightly, forfeits Edmund’s love, which gradually transfers itself to Fanny, just as she always longed for but never dare hope. One of Fanny’s sisters, Susan, takes her place as her aunt’s companion at Mansfield Park, and Edmund and Fanny settle at the Parsonage. 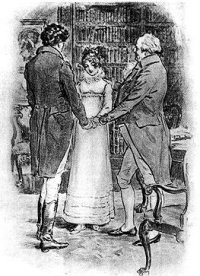 The first of Jane Austen’s novels to have been conceived and wholly written at Chawton, Mansfield Park is very different in tone from its predecessors. For some readers it is the most substantial and satisfying of Jane Austen’s novels. Others like it the least, perhaps because wit and humour, though not absent from the novel, seem to be regarded with some suspicion.

Most controversial of all is the heroine, Fanny Price. Some feel as tenderly toward her as her author does; others find her too solemn. Fanny comes to Mansfield at the age of ten, a poor relation. Timid and self-effacing, she stands on the sidelines for the first half of the novel, observing the courtships and flirtations of her cousins the Bertrams and visitors to the neighbourhood, Henry and Mary Crawford.

The departure of some of these characters forces Fanny into a more prominent role in the second half of the novel. Now her own strength of character is tested by pressure to submit to the destiny chosen for her by the powerful men in her life. From being the most marginal figure in the Mansfield community, Fanny turns out to have its future welfare in her keeping.

Mansfield Park is exceptional among the novels for using the literary devices of symbolism and foreshadowing. They make a large contribution to the aesthetic qualities of the book. At least three times Jane Austen brings these devices into play.

The first is the day out at Sotherton. The characters divide naturally into groups, which foreshadows their later involvement with one another. In the ‘wilderness’ – itself symbolic – Fanny is forgotten while Edmund and Mary wander off together. Maria Bertram, accompanied by the man she is engaged to, Mr Rushworth, and the man she loves, Henry Crawford, arrives at a locked iron gate leading to a different part of the garden. Maria, facing the prospect of marriage, has a feeling of constraint that she expresses metaphorically. While Mr Rushworth goes off to fetch a key, Maria allows Henry Crawford to help her scramble round the side of the gate and walk off toward a knoll in the distance – just as he will lead her into adultery later in the novel.

The next major event in the young people’s lives is their absorption in amateur theatricals. Rehearsals allow them to rehearse the parts they would like to play in real life with one another. Maria and Henry enjoy many rehearsals of the scene in which they have to embrace as mother and long-lost son; while Mary’s character has to declare her love for Edmund’s, and boldly propose marriage. The fit between the characters in the novel, and those in the play, Mrs Inchbald’s melodrama Lovers’ Vows, is significant.

The third use of symbolism concerns William’s cross. Fanny’s beloved sailor brother William sends her an amber cross as a gift, an incident copied from life, as Jane Austen’s brother Charles sent topaz crosses to his sisters. To wear the cross at the ball, Fanny needs a chain. Mary gives her one of her own necklaces, but it turns out that Fanny has been tricked into accepting what is really the gift of Henry, her unwelcome suitor. Meanwhile Edmund, the man Fanny secretly loves, buys a simple gold chain for his cousin. When she comes to try them, Fanny finds that Henry’s necklace won’t go through the cross, but Edmund’s chain will. The symbolism is subtle and open to different interpretations.

Most of the action of the novel takes place at Mansfield Park, the elegant and comfortable mansion of Fanny’s rich relations, the Bertram family. Fanny has been transplanted here from her home in the back streets of Portsmouth. Lady Bertram and Mrs Price are sisters, starting off with the same chances in life, whose marriages have brought them very different status and lifestyles. Fanny is initially delighted when her uncle suggests she might like to visit Portsmouth again, after being away eight years. But the reality of her parents’ home soon makes her revise her opinion.

We feel with Fanny the tumult, noise, disorder, dirt and confinement of a working-class home. It is not only shortage of money, it is bad management that makes the Prices’ house so uncomfortable.

Her eyes could only wander from the walls marked by her father’s head, to the table cut and notched by her brothers, where stood the tea-board never thoroughly cleaned, the cups and saucers wiped in streaks, the milk a mixture of motes floating in thin blue, and the bread and butter growing every minute more greasy than even Rebecca’s hands had produced it. Her father read the paper, while her mother lamented over the ragged carpet as usual.

Jane Austen paints her Portsmouth scenes convincingly. To be able to move comfortably from descriptions of country house life to such scenes of domestic squalor demonstrates a range for which she is not always given the credit she deserves.