Catherine Morland is an innocent, inexperienced country girl who has never left her home until taken to Bath for a six-week visit by childless neighbours, Mr and Mrs Allen. In Bath Catherine meets a variety of characters and begins to learn the ways of the world, though never losing her fundamental simplicity and honesty. An avid reader of Gothic novels, she shares this taste with a new friend, Isabella Thorpe, and quite fails to see through Isabella’s self-serving, designing nature, though she never warms to Isabella’s boorish brother John. The other new pair of friends with whom she contrasts the Thorpes are the brother and sister Henry and Eleanor Tilney, people of cultivation and intelligence. When Catherine is invited to go back with them to their home in Gloucestershire, and when she learns that that home is an Abbey, she is in raptures. Only the forbidding nature of their father, General Tilney, threatens to spoil her enjoyment, though he treats he with almost oppressive courtesy. 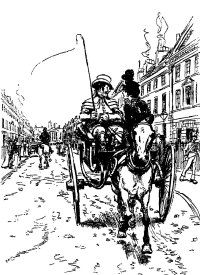 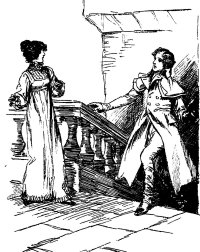 At the Abbey, Catherine indulges her imagination, even going so far as to suppose that the General has murdered his wife, or incarcerated her for years. With the utmost kindness, Henry disabuses her of this notion, but then something dreadful does happen, when the General suddenly and angrily turns Catherine out of his house. Without even the chance to say farewell to Henry, who is staying at his nearby rectory, Catherine miserably makes her way home, where her unimaginative mother supposes she is pining for the luxuries of the Abbey when in reality she is pining for Henry. Within two days, however, Henry turns up and, in defiance of his father, asks her to marry him. Before too long the General – who first thought Catherine an heiress, then that she was penniless – is put in a good humour by Elinor’s engagement to a viscount, and is brought to give his blessing on the marriage.

In Northanger Abbey we have two kinds of novels cleverly and most effectively welded into one. The Bath scenes which occupy the first part of the novel belong to the genre that describes a young lady’s entrance into the world. The later chapters set in Northanger Abbey are a skit on the popular Gothic novels of the day.

With such literary origins, it is not surprising to find in Northanger Abbey a highly self-conscious work of art. Quite deliberately, Jane Austen keeps reminding us that we are reading a novel. This is appropriate in a work whose chief theme is the difference between illusion and reality, and the importance of knowing which we are dealing with at any one time.

The novel follows Catherine Morland’s progress from innocence and delusion to understanding and clear sight. She never loses her honest and unaffectedness, which is what makes her an attractive heroine despite being neither clever nor witty. But she does learn a few lessons in the ways of the world, while artlessly working her way into the affections of the hero. He is clever and witty – in fact, in his scrupulousness about language and ironic vision, Henry Tilney has often been thought to resemble Jane Austen herself.

A young lady’s entrance into the world

This, the sub-title of Fanny Burney’s Evelina, was a fruitful genre for female writing. An inexperienced girl who has grown up in the country is introduced into the social world of London or Bath, with all the novelties of experience and variety of characters that can be imagined. To preserve her reputation and attract the right kind of man to be her husband, she has to learn to read character in the odd people she encounters, some of whom may have designs upon her person or her money.

Jane Austen takes this convention, makes what use of it she pleases, and subverts what she finds far-fetched. Catherine Morland goes to Bath, all wide-eyed innocence, and encounters many novelties. But she does not set the town on fire with her beauty, as a real heroine would. One of the conventions of the genre was that the heroine’s chaperone would add to her problems by embarrassing her in company or compromising her good name. Catherine’s chaperone does neither – she is merely ineffectual. Mrs Allen belongs to that class of females who can raise no stronger emotion than surprise that any man should like them well enough to marry them. She fails Catherine in nothing more serious than omitting to tell her that she should not drive in an open carriage with a young man.

And so it goes on. The misunderstandings which are part of every heroine’s experience are in Catherine’s case very mild and everyday ones. Jane Austen shows us that the incidents of real life, while far removed from the wild happenings in novels, are actually just as important to the happiness of the individual – and just as interesting, if not more so, to read about.

Jane Austen’s earliest writing had been in the form of burlesque, that is, making fun of the literary convention by exaggerating or flattening its features. The adventures that befall Catherine at Northanger, always ending in bathos, are a burlesque on the Gothic novel tradition.

Gothic novels were usually set in castles or abbeys in mountainous regions like Italy or the South of France, and involve the heroine discovering dark deeds. These are what Catherine Morland calls ‘horrid novels’ – the equivalent of our horror films. She reads them for the pleasure of being frightened, and her imagination is so filled by them that she begins to regard them as a true representation of real life.

At Northanger Abbey she fancies all kinds of horrors and is disabused either by her own discovery of reality, or by Henry Tilney’s putting her right. This is highly comic, but the finishing irony is that something unpleasant does happen to her, albeit of a most mundane nature.

Defence of the novel

Northanger Abbey contains Jane Austen’s famous defence of the novelist’s art. Catherine Morland’s favourite reading is novels. ‘Yes, novels,’ Jane Austen writes, ‘for if the heroine of one novel be not patronised by the heroine of another, from whom can she expect protection and regard?’ She gives a specimen of the common cant:

“And what are you reading, Miss -?” “Oh, it is only a novel!” replies the young lady, while she lays down her book with affected indifference or momentary shame.-“It is only Cecilia or Camilla or Belinda”; or, in short, only some work in which the greatest powers of the mind are displayed, in which the most thorough knowledge of human nature, the happiest delineation of its varieties, the liveliest effusions of wit and humour, are conveyed to the world in the best-chosen language.

It is a nice irony that though dangerous when confused with real life, novels can actually give us knowledge of our fellow human beings that surpasses that of real life.