This event has now passed

The conference this year is based in York, chosen for its historic interest and unique charm; and after all, Jane Austen did say, of Richard III, ‘but as he was York, I am rather inclined to suppose him a very respectable man’. 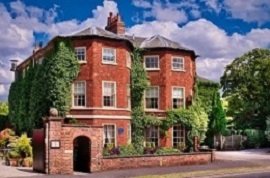 The theme is Jane Austen and her Fellow Writers and the programme will include four lectures, a costume presentation, an outing to the home of Laurence Sterne in the lovely North Yorkshire village of Coxwold, and the chance to visit the city of York where you can wander down ancient streets like Stonegate and The Shambles, walk on the City Walls, visit the magnificent Minster, the 15th-century treasurer’s House, two Georgian gems – Fairfax House and the Mansion House – or have lunch in the elegant Assembly Rooms.

Because we are aware of the range of ages, mobility and energy levels among delegates, and because the lgistics of taking a large group around the city on a Saturday would be almost impossible, the visit to the city will be self-guided. to help you make the best use of the day, you will nhave a comprehensive pack which includes contact numbaers back at the hotel, maps, bus timetables, taxi information, places to eat and a range of places you may want to visit. The idea is that you will be able to choose what you wish to see and do as much, or as little as suits you, returning to the hotel when you are ready. 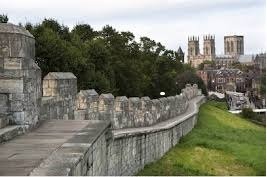 The Walls of York

Please note that booking closed on Saturday 29 May 2021 with balance of payment due by Saturday 24 July.

It is hoped all delegates will return in time for: 4.00 – 5.30 pm Gothic for Girls: A costume presentation by Lucy Adlington of History Wardrobe. 7.00 pm Pre-dinner drinks. 7.30 pm Three-course dinner. Sunday 26 September From 8.00 am Breakfast 10.00 am Lecture by Dr Bill Hutchings: Keats and Jane Austen’s Persuasion. 11.00 am Coffee. 11.30 am Lecture by Dr Richard De Ritter: Children and Conversation in the Work of Jane Austen and her Contemporaries 12.45 pm Light lunch. Conference ends.

Marilyn Joice, a semi-retired primary teacher, has been a life-member of the Jane Austen Society since 1975. She is currently serving her third term on the Society’s committee and is Chair of the Northern Branch, which she co-founded with five other Jane Austen enthusiasts in 1999. She was part of a small sub-committee that set up the Society’s Educational Outreach programme for which she has written several talks. She has given talks to a range of groups, from schools, University clubs and libraries to museums, literature festivals and local history societies.

Dr Ralph Harrington studied History at London University and the University of oxford, where he specialised in the cultural history of eighteenth-century England. He was Lecturer in History at the Univesity of York, and has also taught at Hull University, the Open University and the WEA. He has just completed a three-year project at the University of Leeds, researching the Georgian decorative plasterwork at Fairfax Houase in York, and is currently a consultant in the conservation and interpretation of historic buildings with a particular interest in eighteenth-century urban buildings.

Lucy Adlington is a dress historian with 20 years’ experience of lecturing and collecting. She runs the History Wardrobe company, a delightful series of costume-in-context presentations, which offer 100 shows across the Uk each year. Lucy, who read English at Cambridge, is the author of Great War fashion, fashion: Women in World War One; Stitches in time – The Story of the Clothes We Wear; Women’s Lives and Clothes in WW2: Ready for Action. She also writes history-inspired fiction, including the Carnegie-nominated The Red Ribbon, a novel inspired by the dressmakers of Auschwitz. She collects 19th- and 20th-century constume, and her ambition is to own an 18th-century gown of Spitalfields silk.

Dr Bill Hutchings is Honorary Research Fellow in the School of Arts, Histories and Cultures a the University of Manchester, where he was previously Senior Lecturer in English Literature and Director of the Centre for Excellence in Enquiry-Based Learning. He has published on, among other authors, the eighteenth-century poets William Collins, William Cowper, Thomas Gray and James Thomson. His Living Poetry and Living Fiction were published in 2012 and 2014 respectively. He has also published and lectured extensively on the university-level teaching of literature. He has been speaking regularly at Jane Austen Society events for twenty years, and is now patron of the Northern Branch.

Dr Richard de Ritter is a lecturer in the School of English at the University of Leeds. He is the author of Imagining Women Readers 1789-1820, and has published on a range of Austen’s contemporaries, including Maria Edgeworth, Jane West and Elizabeth Hamilton. He is currently working on the children’s literature of the late-eighteenth and early-nineteenth centuries. He also teaches an undergraduate module dedicated to the work of Jane Austen.