The five Bennet sisters will be left without a home or income when their father dies, and their mother is very anxious to get them well married, eyeing up any single man with that in mind. Of the sisters, Jane is the most beautiful and good-natured, Elizabeth is witty and spirited, Mary is plain, Kitty silly and Lydia, barely sixteen, is wild, sexually precocious and self-willed. Their parents are ill-matched, Mrs Bennet being embarrassingly foolish, and Mr Bennet sardonic, shutting himself in his study and fond only of his two eldest daughters. 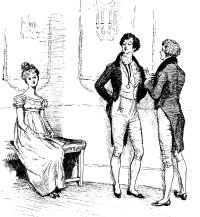 She is tolerable, I suppose 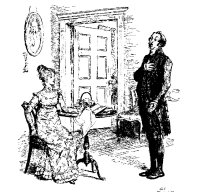 Two rich young men come into the neighbourhood, Mr Bingley, who appears to fall in love with Jane, and his haughty friend Mr Darcy, who first scorns but then finds himself drawn to Elizabeth. Elizabeth has taken against him, however, a prejudice confirmed when a new friend, George Wickham, spreads stories about Darcy’s double dealing. Elizabeth now receives an unwelcome proposal from her pompous cousin, Mr Collins, and is horrified when three days later he is accepted by her unromantic friend, Charlotte Lucas, who fears being left an ‘old maid’. Darcy and Bingley leave the neighbourhood, leaving an unhappy Jane behind them, and Elizabeth feels her faith in human nature undermined.

Visiting the newly-married Mr and Mrs Collins at their vicarage in Kent, she is introduced to his patron, haughty Lady Catherine de Bourgh, aunt to Mr Darcy, who comes to visit. To Elizabeth’s immense surprise she receives a proposal from Darcy, which she angrily rejects, accusing him of separating Jane and Bingley, and spoiling Wickham’s prospects. Darcy stays up all night writing a detailed letter in his own defence, and when Elizabeth reads it she begins to revise her opinion of him, though still with no wish to marry him. 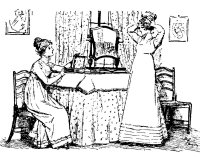 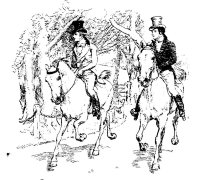 Bingley and Darcy return to Longbourn

A few months later Elizabeth accompanies her aunt and uncle on a tour of Derbyshire, including a visit to Darcy’s house, Pemberley, having been assured that the master is absent. The housekeeper speaks highly of Darcy as master, landlord and brother, and Elizabeth’s feelings soften still further. Darcy himself now appears, and shows by his changed demeanour that he has taken some of Elizabeth’s criticisms to heart. Just as they seem to be understanding one another at last, a letter arrives carrying the news of Lydia’s elopement with Wickham. Back home, Elizabeth finds a mother in hysterics and a father absent on a quest to find the young couple and make them marry. He returns home from London defeated, but Darcy is more successful, paying off Wickham’s debts and buying him a commission in the army up north. Now completely won over, Elizabeth joyfully accepts Darcy’s second proposal, while Jane becomes engaged to Bingley, who has never ceased to love her. ‘Happy for all Mrs Bennet’s maternal feelings’, begins the last chapter, ‘was the day on which she got rid of her two most deserving daughters’.

From its famous first sentence to its almost fairytale ending, Pride and Prejudice sparkles with wit and youthful high spirits. The heroine is perhaps the most delightful of any created by Jane Austen – or by any other writer, for that matter. The dialogue is masterly, the comic characters wonderfully ridiculous and the plot has a most satisfying shape. If the novel lacks the depth of Jane Austen’s later creations, it is unequalled in surface brilliance and humour.

The tone of the novel is a happy one. The heroine, Elizabeth Bennet, laughs at most of the follies around her, and we laugh with her. She has her share of suffering, but not enough to occupy a very large proportion of the narrative. Except for occasional moments of despair, her outlook is an optimistic one. Perhaps more optimistic than her economic circumstances warrant – for the Bennet girls really will be homeless when their father dies, and Mrs Bennet, for all her faults, should be given some credit for worrying about their future. Elizabeth’s insouciance is partly the result of her nature, partly a reaction to her mother’s fussing, but it is also an unconscious product of the author’s youth. At the time she wrote Pride and Prejudice, Jane Austen had not failed to observe that in society as it stood, marriage was ‘the only honourable provision for well-educated young women of small fortune’; but she had hardly yet begun to reflect seriously on the predicament of dependent or dispossessed women.

On the alternate advance and retreat between the hero and heroine of this novel, its interest, suspense and ultimate satisfaction depend. Their movements toward and away from one another have a dance-like quality. It has been said that with this novel Jane Austen hit upon the archetypal romantic plot, much used in our own day by formula writers. Independent-minded woman meets arrogant man and conceives an instant loathing for him. He is attracted, but resists acknowledging the fact even to himself. But he can’t help thinking about her and eventually he demonstrates, by some act of exceptional tenderness and unselfishness, that for all his strength and self-sufficiency, he is enslaved by her charm. It is a potent story, which Jane Austen tells with intelligence and wit no other author comes near.

In such a plot, the heroine and hero are called on to bear considerable weight. They must be sufficiently complex and capable of change to engage our interest and make the vacillations between them convincing and not artificially drawn out. Their eventual coming together must seem as absolutely right as it once seemed totally unlikely.

The success of Pride and Prejudice is in large measure the success of Elizabeth Bennet and Mr Darcy as creations. And yet they are presented very differently, one from the inside, and the other on the periphery of our vision. Darcy remains something of a wish-fulfilment figure, handsome and aloof. But that is entirely appropriate for this kind of romance. That Darcy is difficult for anyone to know, including ourselves, only heightens his appeal for the one woman whom he allows to glimpse his vulnerability beneath the social mask.

Elizabeth Bennet becomes known to us much more fully. It is impossible not to care about her destiny. She has a high opinion of herself and will neither sell herself short to a suitor like Mr Collins, nor allow a more socially powerful figure like Lady Catherine to get the better of her. But she will admit herself to be in the wrong when convinced by Mr Darcy’s letter that she has been ‘blind, partial, prejudiced, absurd’. With all her joyous spirits, Elizabeth has a serious side to her nature, for she is very deeply concerned to live a good and moral life. We love Elizabeth not only because she laughs, but because she thinks, grows and changes.

Light and bright and sparkling

After the charm of Elizabeth Bennet, Pride and Prejudice is loved for its gallery of comic characters. Mr and Mrs Bennet, Mr Collins and Lady Catherine de Bourgh are richly idiosyncratic creations who have achieved the status of classics; even those who have not read the novel are often familiar with their names, and Mr Collins has even given his to a particular kind of thank-you letter.

Mr Collins and Lady Catherine come as a package, as it were, for it is his ridiculous eulogies of his patroness that convict Mr Collins out of his own mouth during his first visit to Longbourn. His proposal to Elizabeth is one of the most richly comic scenes in English literature, especially prefaced as it is by his changing his choice from Jane to Elizabeth in the time it takes for Mrs Bennet to stir the fire. Later, when Elizabeth visits Hunsford, she has a chance to observe Mr Collins in obsequious attendance on Lady Catherine herself.

Mrs Bennet is certainly no object of humour to Elizabeth, who is either embarrassed or ashamed of her mother. The ‘follies and nonsense, whims and inconsistencies’, which amuse Elizabeth in her neighbours are no laughing matter so close to home. The humour mainly arises when Mr and Mrs Bennet are together, for she is so slow-witted that she has no idea when he is mocking her. His sarcasm masquerades as politeness. When she first read the novel in print, Jane Austen wondered whether it was perhaps ‘too light and bright and sparkling’. The verbal wit of Mr Bennet and, less cruelly, of Elizabeth, certainly endow the novel with its special brilliance – but it is doubtful if any reader has ever complained of their excess.