Nineteen-year-old Elinor and seventeen-year-old Marianne Dashwood are sisters, one prudent, the other romantic. On the death of their father they are left with little money or status, and move with their mother and youngest sister to a humble cottage on the Devonshire estate of a rich relation, Sir John Middleton. Here Marianne is soon swept off her feet by the handsome, dashing Willoughby, while Elinor quietly nurses her preference for Edward Ferrars, a sensible but strangely melancholic young man whose feelings towards herself she struggles to understand. Meanwhile Colonel Brandon, a serious man of thirty-five, is evidently much attracted to Marianne, though his grave manner cannot compete with Willoughby’s charm. Things go wrong for both sisters when pert, self-serving Lucy Steele confides in Elinor that she is herself secretly engaged to Edward, and Willoughby suddenly leaves the neighbourhood without explanation. The conduct of the sisters is contrasted, Elinor keeping her misery to herself while Marianne indulges and even feeds her grief, encouraged by her fond mother. 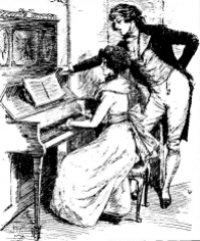 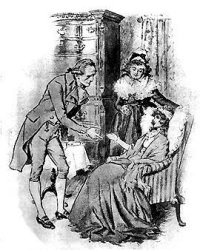 The scene moves to London, where the sisters are guests of Mrs Jennings, the vulgar but kindly mother-in-law of Sir John. In the highly artificial world of London society, Marianne’s open pursuit of Willoughby can only lead to more heartbreak for herself as he spurns her and becomes engaged to an heiress. Lucy’s sister Nancy betrays her secret, whereupon Edward’s snobbish, domineering mother cuts off his allowance and he decides to become ordained. Colonel Brandon kindly offers him a modest living on his estate, Delaford, in Dorset. As this is not smart enough for Lucy, she rapidly transfers her affections to Edward’s younger brother Robert and persuades him to elope. Meanwhile, staying with Mrs Jennings’ married daughter in Somerset on the way back to Devon, Marianne falls seriously ill through self-neglect. Colonel Brandon rides off to collect Mrs Dashwood, and Willoughby, now a married man, makes a contrite appearance. Edward is now free to propose to his true love Elinor, and before too long a recovered and chastened Marianne, despite her earlier scorn for second attachments, freely agrees to become the wife of the worthy Colonel Brandon.

The integrity of the self and the claims of society lie at the heart of this novel, which explores the destiny of two sisters, Elinor and Marianne Dashwood. The world of Sense and Sensibility is a particularly public one. Much of life is lived communally; the heroines are forced into a great deal of empty socialising and their romantic and financial circumstances are the subject of speculation and curiosity. With the exception of their mother and the men they eventually marry, the characters surrounding the heroines are mean-spirited, impertinent or vulgar. Against this background, we see two young women falling in love, suffering disappointment and heartache, and learning to achieve a balance between passion and prudence. Their stories are parallel, but while Elinor endures and is rewarded by marriage with the man she loves, Marianne has to remake her own character before she can find peace of mind.

The Cult of Sensibility

The earliest of her novels, Sense and Sensibility is a reaction to Jane Austen’s youthful reading. The cult of sensibility, which was prevalent in the literature of that time, argued that to have overpowering feelings was a sign of superior character. It followed that it was as wrong as it was hopeless to try to control or hide such feelings, whatever inconvenience or suffering they may cause their owner or anybody else. Jane Austen had two quarrels with the cult of sensibility. The first was that people might exaggerate and falsify their feelings in order to be thought superior. The other was that even when feelings were deeply held and true, they did not excuse their owner from observing the common decencies of social behaviour.

By showing us how two sisters handle their love relationships, Jane Austen sets out to demonstrate the dangers of excessive sensibility. To say that Elinor Dashwood stands for sense and her sister Marianne for sensibility is to put the case too baldly. Elinor is sensible and prudent, but she too has strong feelings. It is just that she keeps them to herself; feelings should be private things, she – and her author – believe. Marianne is not without sense, but is has been overridden by the almost morbid cultivation of her sensibility. She possesses genuinely strong feelings, which she feeds and glories in, whether joy or grief. The conventions of society are beneath her notice, because she considers herself a superior person.

Most readers find Marianne’s warmth of heart, spontaneity and openness of manners bewitching. They suit the spirit of our age better than the stiff decorum she herself scorns. And Marianne’s transgressions of society’s rules hurt nobody more than herself, so there seems little to forgive her for. Most of the characters she is rude to are either too obtuse to notice – like the loveable but limited Mrs Jennings – or they are despicable anyway.

Nevertheless, such is Jane Austen’s skill in manipulating our responses, we favour Elinor’s point of view. We see most of the action of the novel through her eyes. Elinor, for all her calm good sense and self-control, is never insufferably priggish. We know that inwardly she suffers deeply, though the people around her have no idea. We understand that having a mother who can be as romantically unworldly as Marianne herself, almost foists on Elinor the role of the prudent one of the family. Elinor is finally saved from priggishness by her ability to laugh wryly at herself. Consider this passage, which follows Mrs Jennings’ attempts to soothe Marianne’s broken heart with a glass of the wine which her husband used to take for his gout:

“Dear Ma’am”, replied Elinor, smiling at the difference between the two complaints for which it was recommended, “how good you are! But I have just left Marianne in bed, and, I hope, almost asleep; and as I think nothing will be of so much service to her as rest, if you will give me leave, I will drink the wine myself.” Mrs Jennings, regretting that she had not been five minutes earlier, was satisfied with the compromise; and Elinor, as she swallowed the chief of it, reflected that, though its good effects on a cholicky gout were, at present, of little importance to her, its healing powers on a disappointed heart might be as reasonably tried on herself as on her sister.

One of the lessons that Marianne has to learn is that a nosy, vulgar character like Mrs Jennings may actually possess genuine warmth of heart, and to be entitled to her respect and affection for that reason. But on the whole, the Dashwoods are not required to reassess their opinions of other people. Their task is rather to preserve, and if possible spread, the values which make them superior to the mercenary society all around. From the beginning of the novel, the Dashwood household has been characterised by affection, intelligence and integrity.

But while it remains a household of poor women it has no power to influence the larger social scene – rather, it is swamped by it. Only by marriage to like-minded men, Edward Ferrars and Colonel Brandon, can Elinor and Marianne become influential members of a local community and find fulfilment not only as individuals but as social beings.