Anne Elliot is the second of three daughters of vain, snobbish Sir Walter, a spendthrift baronet obliged to let his country house and move to Bath to pay his debts. Eight years before the story begins, Anne was briefly engaged to a naval officer, Frederick Wentworth, but was persuaded to break off the engagement by her godmother, Lady Russell, on grounds of prudence, a decision Anne has regretted ever since. At twenty-seven, she is now faded and thin, and life seems to have passed her by; nobody now seems to expect her to marry.

The new tenants of Kellynch are Admiral Croft and his wife, Wentworth’s sister, which brings Anne’s bittersweet memories to the fore again. Before joining her father and elder sister in Bath, she spends a few months with her younger, married sister Mary Musgrove in the country, and here she encounters Captain Wentworth again and gradually gets used to being in company with him. He treats her with cold formality, still being angry at her decision, but she is confirmed in her feeling that she will never love another man. He tries to attach himself to Henrietta or Louisa Musgrove, sisters-in-law of Mary, and both seem to hero-worship him, though Henrietta eventually re-establishes an understanding with her cousin, a young clergyman. The small but telling events of these autumnal months in the country bring Anne an exquisite mixture of pleasure and pain. 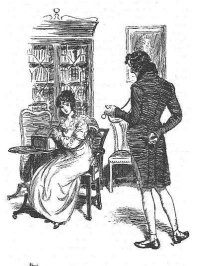 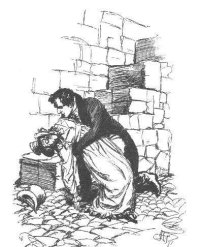 Misfortune at the Cobb

A two-day visit to the seaside resort of Lyme now varies the scene. The Musgrove party meet naval friends of Captain Wentworth and Anne is charmed by their warmth and camaraderie. “These would have been all my friends,” she reflects. Captain Benwick, who has recently lost the woman he was engaged to, finds in Anne a sympathetic listener. Another new acquaintance is William Elliot, an estranged cousin of the family, who happens to be passing through Lyme and shows his admiration of Anne’s looks, which seem to be blooming again. But the visit is brought to a dramatic end when Louisa sustains a bad fall on the Cobb and is concussed. Anne’s presence of mind is contrasted with the hysterical or helpless reaction of most of the others.

After Christmas spent with Lady Russell, Anne is taken by her to Bath, and here she sees much more of her cousin, who has ingratiated himself with Sir Walter and Elizabeth. Anne renews her friendship with an old school friend, Mrs Smith, now a widow and an invalid, while Sir Walter courts his rich relations the Dalrymples. The astonishing news now reaches Anne that Louisa Musgrove has become engaged to Captain Benwick; shortly afterwards Captain Wentworth arrives in Bath. Though his love for Anne is evidently returning, to her very great joy, he afflicted by jealousy of Mr Elliot, whose intimacy with the family he now observes. In a beautiful scene set in the White Hart Inn, Bath, where most of the characters have gathered, Anne manages to speak up for herself, though not directly to Captain Wentworth, on the subject of constancy in love, and encouraged, he writes to her offering his hand. Anne has been offered a second, well-deserved chance of happiness and fulfilment as the proud and loving wife of a naval officer. 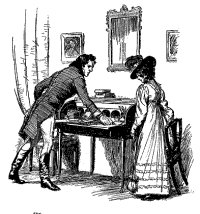 Jane Austen was about forty years old when she wrote Persuasion. Until then, she had always taken as her heroine a young woman at the threshold of life, inexperienced, falling in love for the first time, aged somewhere between seventeen and twenty-one. Now she told a different kind of story. Anne Elliot is twenty-seven, with a fully mature mind. For her, falling in love is something that belongs to her past. Eight years before the novel opens, she had become engaged to marry Captain Wentworth of the Royal Navy, but was persuaded to break off the engagement for reasons of prudence. She has spent the last eight years regretting the decision, and does not expect to find love again.

The novel has two settings. From Michaelmas to Christmas Anne resides in the Somerset countryside, first at the home of her married sister, then with her friend Lady Russell. Two days are spent by the sea at Lyme, where events occur that will change the destiny of several of the characters. After Christmas Anne goes reluctantly to live in Bath. Her spend-thrift, snobbish father, Sir Walter Elliot, has taken a house here in order to economise, while his country estate is let to Captain Wentworth’s sister and her husband, Admiral Croft. Anne experiences Bath as a place of confinement, artificiality and uselessness. She is rescued from it by Captain Wentworth’s gradual realisation that he is still in love with her, as she has never ceased to be in love with him.

Persuasion is one of the most tender love stories ever written, and Anne’s gentle, patient but firm character makes her a fitting heroine for Jane Austen’s most mature novel. ‘Almost too good for me’, Jane Austen called her. Could she be modelled on Cassandra, whose reserved nature she seems to share, and whose heart seems to have remained similarly faithful to her lost love? If so, she is Jane’s tribute to the sister she had admired all her life, and perhaps her attempt to make that sister’s modestly concealed virtues understood by the world.

‘The influence so sweet and so sad of the autumnal months in the country’, permeates this novel, both literally and metaphorically. When Anne accompanies the others on a country walk, her object is not to be in the way of anybody:

Her pleasure in the walk must arise from the exercise and the day, from the view of the last smiles of the year upon the tawny leaves and withered hedges, and from repeating to herself some few of the thousand poetical descriptions extant of autumn, that season of peculiar and inexhaustible influence on the mind of taste and tenderness.

In such passages it is possible to feel Jane Austen coming under the influence of the romantic movement in poetry, allowing herself a personal response to nature that is new is her fiction. Rather like Anne Elliot herself, it could be said that Jane Austen erred on the side of caution in her youth, and learned romance as she grew older. Later in the same passage, on hearing Captain Wentworth speak with enthusiasm to Louisa Musgrove,

Anne could not immediately fall into a quotation again. The sweet scents of autumn were for a while put by, unless some tender sonnet, fraught with the apt analogy of the declining year, with declining happiness, and the images of youth, and hope, and spring, all gone together, blessed her memory.

Though young by today’s standards, Anne feels she is in the autumn of her life. Her ‘bloom’ is gone, and she is no longer regarded as one of the marriageable young ladies in company. The older women accept her as one of themselves. This is partly because she is so sensible, but also because sadness and regret have made her seem old before her time. Knowing herself loved, by the end of the novel, will give her a new spring of youth and beauty.

In Persuasion Jane Austen contrasts three sets of characters, and questions which set is most fit to have leadership of the country in their hands. There are the people of high birth like the Elliots and Dalrymples, who live empty, useless lives, who are inhospitable and snobbish, and over-concerned with appearances. By losing Kellynch through his own extravagance, Sir Walter shows that local communities can no longer rely on the traditional landed gentry for leadership. They are becoming effete. Then there are the old-fashioned Musgroves, ‘not much educated, and not at all elegant’, but hospitable and unpretentious. This type is dying out, however – even their own children have ‘more modern minds and manners’. Anne greatly prefers the Musgroves to her own relations, for their genuine warmth of heart, but they are not capable of leading the country into the modern age, and their children are lightweight. There is another set of people even more to Anne’s taste: the naval families. Their vigour, bravery, friendliness and loyalty to one another she finds bewitching. “Only they know how to live”, she believes. The novel ends with Anne glorying in being a sailor’s wife, and with Jane Austen praising the profession for both its ‘domestic virtues’ and ‘national importance’.